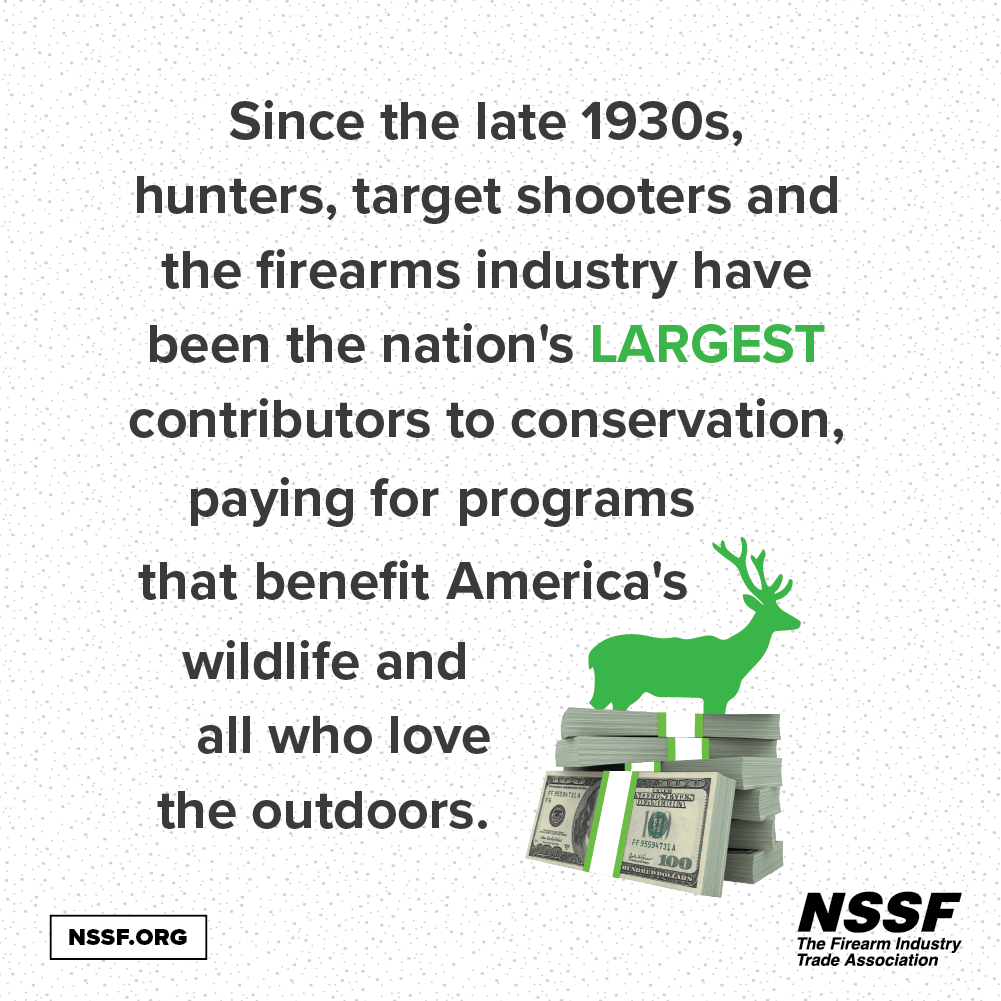 In the early 1900s, when many wildlife species were dwindling in numbers or disappearing, the firearms and ammunition industry stepped forward and asked Congress to impose an excise tax on the sale of firearms and ammunition products to help fund wildlife conservation in the United States. The Federal Aid in Wildlife Restoration Act (also known as the Pittman-Robertson Act (PR)) became law in 1937. The revenue generated from the excise tax is apportioned to state wildlife agencies for conservation efforts, hunter education and shooting projects and programs.

Since the program’s inception, $14 billion has been collected from manufacturers and awarded to states through PR making the firearms and ammunition industry America’s largest contributor to conservation and access. Over the past 75 years, PR revenue has helped to rebuild the population of numerous species and extend their ranges farther than they were in the 1930s.1

The excise tax is set at 11% of the wholesale price for long guns and ammunition and 10% of the wholesale price for handguns. The excise tax applies basically to all commercial sales and imports whether their purpose is for shooting, hunting or personal defense and is paid by manufacturers, producers and importers. The tax is currently administered by the Alcohol and Tobacco Tax and Trade Bureau (TTB) in the Department of the Treasury, which turns the funds over to the U.S. Fish and Wildlife Service (USFWS).

USFWS then deposits the PR revenue into a special account called the Wildlife Restoration Trust Fund, which is administered by the USFWS. These funds are made available to states and territories the year following their collection.

States use the apportioned funds to restore and manage wildlife habitat, for both game and non-game species alike, and to open and maintain access for hunting, shooting and other outdoor recreation. White-tailed deer, elk, turkey and antelope are some of the many species that have seen their populations grow as a result of Pittman-Robertson funding. Additionally, the funds deliver hunter education programs and research projects focused on critical habitat management practices.

Pittman-Robertson creates a direct link between those that hunt and participate in the shooting sports and the resources needed to expand and enhance opportunities to hunt and shoot. Known as the North American Model of Wildlife Conservation, this user-pays public-benefit model is extremely successful because sportsmen and women and the industries that serve them have always been willing to pay extra to enhance, expand and protect America’s hunting, shooting and conservation heritage.