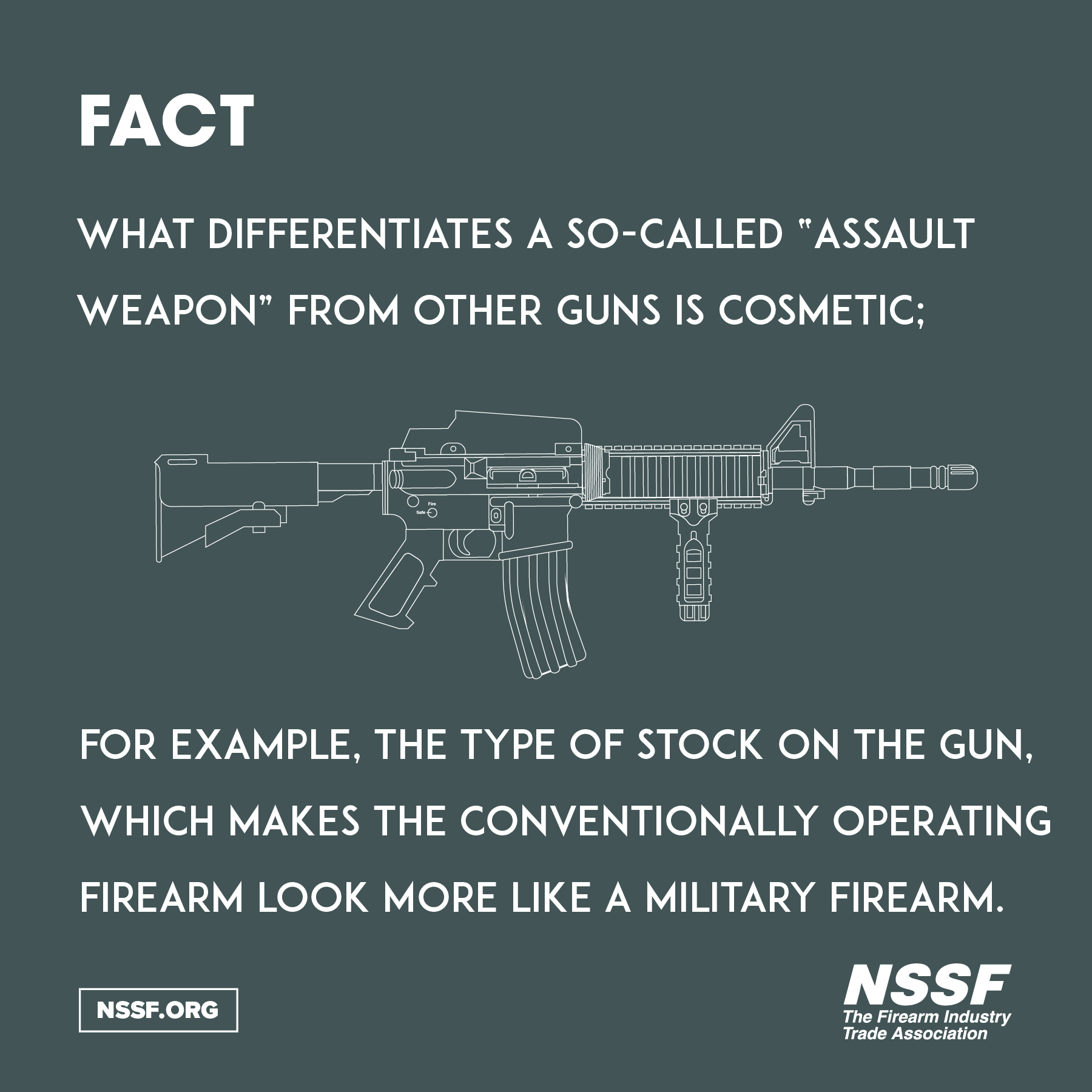 None of these features figure into the criminal misuse of firearms, regardless of their appearance.

The term “Assault Weapon,” coined in the 1980’s in an effort to ban semiautomatic rifles, has arguably become one of the most successful antigun public relations tools in modern history. The term “assault weapon” is now broadly used by antigun activists to describe any and all semiautomatic firearms as taboo and undesirable for private civilian ownership, despite being legally owned and used by millions of Americans. Antigun politicians and misinformed media have perpetuated this erroneous moniker for decades to drive public opinion of semiautomatic firearms into the gutter. As a result, many think that a semiautomatic firearm is a so-called “assault weapon” based on its cosmetic features or assume that the firearm is in fact a fully automatic machine gun.

There is a tremendous amount of misinformation surrounding the issue of so-called “assault weapons.” See other misleading allegations related to these firearms followed by corresponding statements of fact.

Legislation to ban so-called “assault weapons” typically targets rifles that are in common use and rarely used in crime. According to the 2019 FBI Uniform Crime Report, from 2015 – 2019: Knives, Blunt Objects, and Personal Weapons (fists and feet) exceeded rifles of all kinds for cause of death every year.

Semiautomatic pistols, the firearm of choice for concealed carry licensees, have recently garnered attention from antigun lawmakers, as evidenced by their inclusion under the “assault weapon” umbrella in legislation. This practice is becoming more commonplace as the efforts to conceal true intentions of banning all privately owned firearms are diminished. Banning all semiautomatic firearms is now the goal of the antigun lobby who knows that the common criminal will not be affected by such bans and legislation.

Labeling every semiautomatic firearm as an “assault weapon” plays on the emotional response of the public who may not be educated on how firearms work and their everyday use by law-abiding citizens seeking to defend themselves and their families. Legislation to curb crime should be the priority, not laws that will only disarm and endanger those who follow the rules. Semiautomatic firearms are the most common type of firearm in the United States and are used for a wide variety of legitimate purposes, including hunting, small game control, target shooting, competition and personal defense.