The Lefty Shooter’s Dilemma: What to Deal with and What to Get 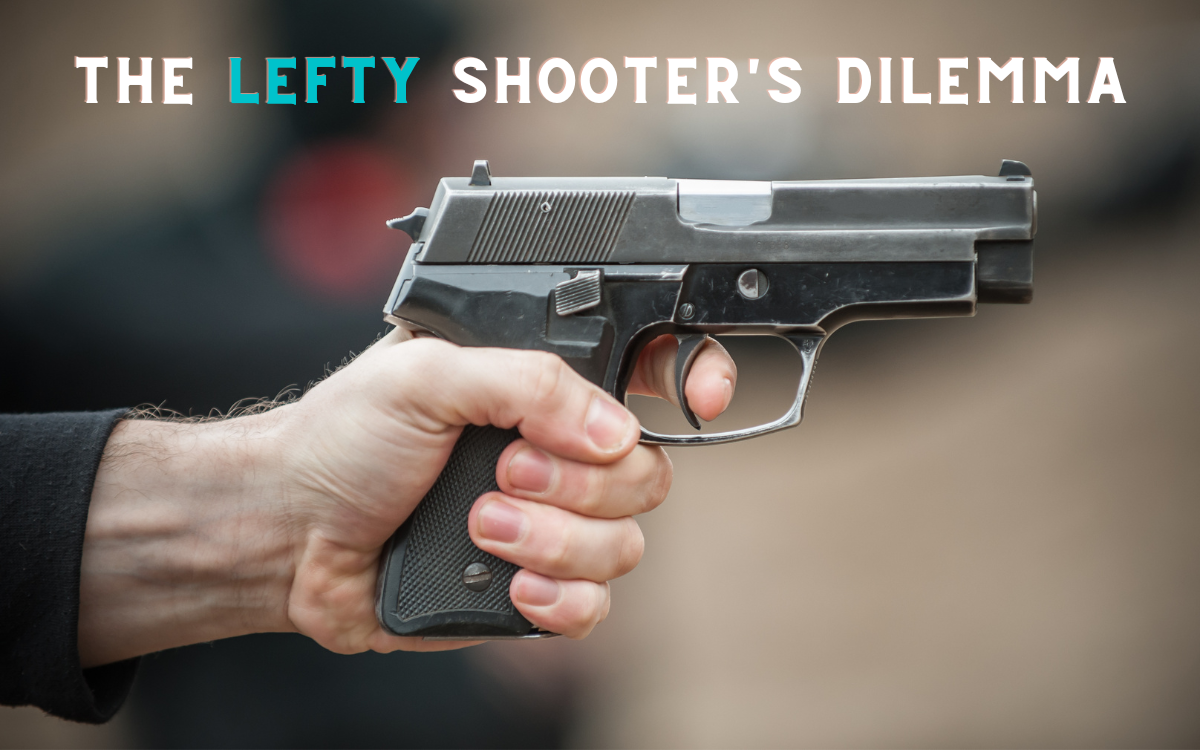 As someone who’s left-handed myself, I know how much of a daily pain in the ass it is to live in a right-handed world. I heard somewhere that left-handed people on average have a shorter life expectancy because of the daily inconveniences we encounter. I don’t know if that’s true, but I can see that as a very real possibility.

I’ve been left-handed longer than I can remember, and I still write, shoot, play golf, and do everything else exclusively left-handed. I’m even left eye dominant, so I’m a pure-blood southpaw.

Being a left-handed shooter is mostly not a big deal, but because most firearms are designed with right-handed people in mind as the primary users, shooting some guns can be inconvenient to say the least.

Luckily, gun manufactures are starting to catch up with the need for ambidextrous and left-hand specific guns. I’ll go over what guns and parts are worth the trouble, and which ones are easier to work around.

Left-handed bolt-action rifles are absolutely worth it if you’re left-handed. I own two left-handed bolt actions. A .30-06 Savage 110L that my grandfather (also a lefty) gave me, and a .22 LR Savage Mark II that I love to use for target practice and small game hunting.

Using a left-handed bolt action just feels so much more natural. Sure, you could just use a standard bolt action because they’re used for accurate shooting without the need to reload a new round super quick. I’ve done this too, and I own two other bolt action rifles that have the bolt on the right side, and I can use them just fine.

At the same time, who knows when you’ll need a quick follow up shot. Especially if you’re a hunter like me, those extra seconds or milliseconds can make the difference between meat on the table or coming home empty handed.

There are a few shotgun manufactures that make left-handed auto loading and pump shotguns. There are even some over-under shotguns that are left-handed because the action release lever pivots in the other direction.

In my opinion, left-handed shotguns are not worth it, especially considering they’re often more expensive than their standard counterparts.

I shoot pump shotguns fairly regularly, and I actually find it easier to use a standard right-hand action. I pump the action back, hold the shotgun at the grip with my left hand, and use my right hand to feed the first shotgun shell into the action. Then I just pump the action forward and repeat but put the remaining shells in the tube at the bottom.

Some shotgun makers are better than others, even with models not specifically designed for lefties, but in general, I think you can practice enough with right-handed shotguns to be just as proficient.

More and more handgun models that come on the market these days have ambidextrous controls. This is great for us lefties, but ironically, I think the intent is that shooters regardless of hand dominance can operate the handgun on either hand, so it’s not all about us.

Handguns like many of the FN’s, Gen 5 Glocks, and HK’s now come standard with ambidextrous slides releases and ambidextrous magazine releases on some models, which makes things a lot easier.

If you own guns that aren’t already ambidextrous, in most cases you can buy aftermarket parts and install them yourself.

There’s a growing trend among the tactical shooting community to make everything ambidextrous to prepare for situations where you won’t be able to use your dominant hand. There’s a lot of merit to that, so there’s a plethora of ambidextrous parts available for ARs and semiautomatic pistols these days.

Adding these parts to your guns isn’t expensive or complicated either, so its truly a no brainer. For ARs, at a bare minimum you should get an ambidextrous charging handle, magazine release, and safety selector. These items are the easiest and cheapest upgrades you can make on your AR build.

As for pistols, if you can find an ambidextrous slide and magazine release for your handgun, get it. Again, these are simple and cheap upgrades that can make your guns more user friendly for you as a left-handed shooter.

The Best Guns for Lefties

Some gins and gun companies stand out above the rest because they’re either designed in a way that’s not cumbersome for left-handed shooters, or they have a wide array of left-handed options. These guns include:

Savage rifles – Savage Arms was an early pioneer of left-handed bolt action rifles, and they continue to have the widest selection for left-handed shooters. I don’t know if they have an engineer or a founder that’s left-handed or something like that, but Savage is definitely a champion of left-handed firearms. Perhaps that’s one of the reasons I’m partial to their rifles. That and they’re exceptionally accurate out of the box.

Mossberg shotguns – I own a Mossberg 500 in 12 gauge and it’s my go-to hunting shotgun. As discussed before, I’ve used it enough that I have a good system that I’m proficient with despite it not being a lefty-specific shotgun. What puts Mossberg’s above other popular shotgun makers is the safety location.

When hunting, its important to use muzzle discipline along with your mechanical safety. The safeties placed behind or in front of the trigger on some shotguns are made with right-handed shooters in mind, and they’re very difficult for lefties. With the safety above the grip, it’s visible and easy to use regardless of hand dominance, so Mossberg gets a thumbs up from me.

Lever Action Rifles – Lever action rifles are another great choice for left-handed shooters. The classic lever action doesn’t discriminate for hand dominance because the age-old design is completely ambidextrous. Whether or not it was intentional by the original inventors, it’s much appreciated.

Gen 5 Glocks – Glock’s latest generation 5 line of handguns all come standard with an ambidextrous slide release. While it takes some getting used to if you’re accustomed to working around not having one on the left side, it’s certainly a nice feature.

Glock being one of the most, if not the most popular pistol brand in the world, adding left-handed controls is a big step. Other gun makers are sure to follow suit, which it seems they already have.

In addition, because there are so many aftermarket parts out there for Glocks, you’ll be able to find ambidextrous mag releases and more feature rich slide releases as well.

Most double barrel shotguns – Similar to Mossberg Shotguns, most side by side and over under shotguns have the mechanical safety located above the grip. This makes things much easier for lefties in the field and on the clay range.

Although there are some over-under shotguns that are left hand specific with an action release that pivots the other way, I’ve never found this to be an issue, but you can decide for yourself if you want to shell out the extra cash.

The Worst Guns for Lefties

While most guns can be dealt with by lefties, there are some types of guns that I won’t even mess with because they’re not worth the hassle.

Bullpup Rifles – Bullpup rifles such as the Steyr AUG and Tavor are cool, and the advantage of having a full-length barrel in a small package is appealing, but they’re completely unrealistic for left-handed shooters.

The big problem with bullpup rifles for lefties lies with where the spent casings eject. Unless the rifle can switch sides where the casings come out, if you’re shooting left-handed, you’re guaranteed to get a face full of hot brass, which is no fun.

Shotguns like the Remington 870, and .22 rifles like the Marlin Model 60 have these safeties, and I’m not a fan. Your time and money are better spent on rifles and shotguns with mechanical safeties located above the grip or on the action.

Handguns with Safeties – These days its uncommon to find a modern handgun with a mechanical safety, but for the models that do, they’re not left-hand friendly. Again, most of the time these safeties are the located on the right side of the handgun for right-handed shooters.

Being a left-handed shooter in a right-handed world isn’t always ideal. However, with a few purpose-built or lefty-friendly guns, some aftermarket parts, and a lot of practice, you can be just as good of a shooter as anyone else.